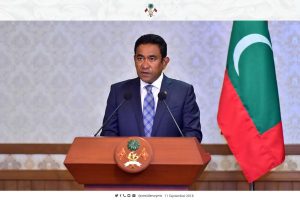 President Abdulla Yameen Abdul Gayoom has appealed to put in extra effort to responsibly safeguard and promote our Islamic faith in the hearts of all Maldivians. The President made this appeal in his message published on the auspicious occasion of the Islamic New Year 1440.

In his message, the President noted that the Islamic New Year reminds us all, of the auspicious event of Hijrah (migration from Mecca to Medina) of the Prophet Mohamed (PBUH), and stated that the event of Hijrah itself is a huge Islamic sacrifice made by our Islamic ancestors.

Moreover, the President called upon the people to uphold the brotherly ties that exist among us despite our differences.

In his message the President also conveyed warm greetings and sincere good wishes to the people of the Maldives, to the Governments and the brotherly people of the Muslim Ummah.