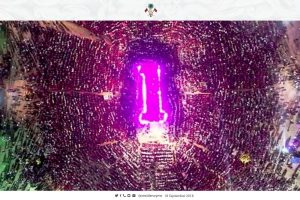 President Abdulla Yameen Abdul Gayoom has called upon everyone to focus on development and avoid creating turmoil in the country. The President made this remark while addressing the gathering at the function organised by Progressive Party of Maldives this evening. The President was accompanied by First Lady Fathimath Ibrahim.

In his speech, President Yameen noted that allowing for disruptions within the society and inviting outsiders to interfere with our internal affairs will lead to nothing but regression.

Highlighting the successful accomplishment of his electoral pledges so far, President Yameen stated that this administration has achieved his pledge of making female members at least 20% of the boards of directors of State companies. He also announced plans to increase this membership of women to 50%, during the next 5 years.

Speaking at the function, President Yameen highlighted the challenges faced in ensuring basic necessities for the people across the country. He underscored the many milestones this administration has achieved in this area, despite all the setbacks.

In this regard, President Yameen noted that during this administration 130 harbours have been developed across the country, easing travel for the people; sewerage services has been established for 75% of the country’s population; pharmacies have been established in every inhabited island; and 12 airport development projects have been undertaken so far. President Yameen also pledged to cut down the charges of basic utility services such as water and electricity in the next 5 years.

President Yameen emphasized that the main priority of his administration is to bring infrastructural development and building cities in all parts of the country. He also underlined the remarkable milestone achieved today, with the inauguration of the new Code F runway at the Velana International Airport, realizing the dreams of all Maldivians.

Furthermore, President Yameen reiterated this administration’s commitment to fulfilling the needs of the youth, and reassured of his continued efforts towards youth empowerment.

TODAY THE MOST QUALITY RUNWAY IS IN MALDIVES – PRESIDENTTHE PRESIDENTIAL ELECTION WILL BE OPEN TO INTERNATIONAL OBSERVERS AND MONITORS,...
Scroll to top