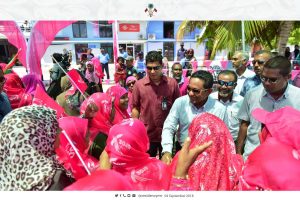 Upon arrival, the President was warmly welcomed by the island’s community.

Prior to visiting Kudahuvadhoo Island, the President visited Maamigili Island and inaugurated the sewerage system in the island.

As part of this two-day tour, President Yameen visited Dhangethi Island yesterday and inaugurated the island’s harbor and initiated the clean water services. He also visited Mahibadhoo Island to mark the completion of road development project in the Island.