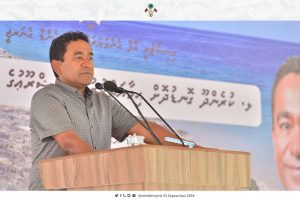 President Abdulla Yameen Abdul Gayoom has called for political differences to be put aside and always prioritise the national development, patriotism and our Islamic values. The President made this remark while speaking at the function held this morning to mark the completion of the shore protection project in Kurendhoo Island, Faadhippolhu Atoll.

Speaking at the ceremony, the President reiterated that despite our differing political views, we should all agree on and support the economic agenda that is intended to benefit the community.

Speaking in this regard, the President called upon everyone to support the administration’s efforts to improve the tourism and fisheries sectors, and not support any action that may hinder the progress of the industries.

Highlighting the importance of protecting and respecting the country’s religion, President Yameen noted that protecting the Islamic faith is the utmost priority for his administration.

Further, the President highlighted that he will always prioritise the people’s needs. He also noted that he understands the eagerness of the community to see the development projects become a reality. In addition, President Yameen reassured that the administration will put in every effort to fulfill the needs of the community. He also gave assurance of the administration’s priority to ensure justice.

As part of the tour, President Yameen visited Naifaru Island yesterday and inaugurated the Lhaviyani Atoll Hospital building and the island’s harbor. Moreover, the President made a visit to Hinnavaru Island and met the people of the island last evening.

President Yameen has also visited Olhuvelifushi Island as part of this tour.