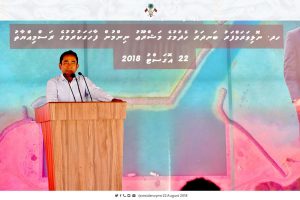 President Abdulla Yameen Abdul Gayoom has stated that the political dissension among us must not stand in the way of the development projects being brought to the community. The President made this remark while speaking at the function held this afternoon to inaugurate the harbour in Nolhivaranfaru Island, South Thiladhummathi Atoll.

Noting the important role played by the state-owned enterprises in fulfilling the needs of the public, the President said that they have shown their real strength in the past 5 years. In this regard, he noted that the Maldives Transport and Contracting Company (MTCC) alone has developed 57 harbours throughout the country, during this administration, with only 25 harbours being developed during the opposition’s rule.

In his speech, President Yameen called upon the opposition to clarify their pledges to the public. He also highlighted the challenges being caused by some who wished to influence the government.

In this regard, the President noted that the Maldives needs a leader who will always uphold the Islamic principles, the country’s constitution and rule of law.

President Yameen is currently visiting some islands of South Thiladhummathi Atoll. During this visit, the President is scheduled to attend the ceremony held in Kulhudhuffushi to mark the completion of the island’s road development project, and shore protection project.