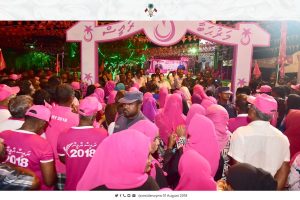 President Abdulla Yameen Abdul Gayoom has appealed to everyone to put forth the nation’s interest, and prioritise national development. The President made this appeal while addressing the people of Hinnavaru Island of Faadhippolhu Atoll, during his visit to the island Friday evening. The President also appealed for the support and cooperation of all citizens to the administration in carrying out its development agenda.

In his speech, the President condemned the call for foreign military intervention by the opposition, noting that a patriot will never support such a traitorous act.

Speaking in this regard, President Yameen reiterated that the only means of ensuring our independence and safety was by having full control over all the domestic affairs of the country. He further noted the danger in involving foreign parties every time an internal decision was to be made for our country.

President Yameen also highlighted the numerous challenges being faced in the international arena. However, he reiterated the administration’s commitment to upholding the Islamic and national values despite the pressure.

President Yameen is currently on a two-day visit to Faadhippolhu Atoll.

As part of the tour, President Yameen visited Naifaru Island yesterday and inaugurated the Lhaviyani Atoll Hospital building and the island’s harbor.

This morning, the President visited Kurendhoo Island, where he took part in the ceremony to mark the completion of the island’s Shore Protection Project.

PRESIDENT YAMEEN CALLS FOR POLITICAL DIFFERENCES TO BE PUT ASIDE AND PRIORITISE...SECRETARY BILATERAL HOSTS LUNCHEON IN HONOUR OF THE VISITING DELEGATION FROM...
Scroll to top