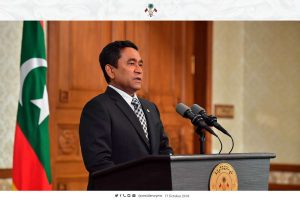 President Abdulla Yameen Abdul Gayoom has called upon the Maldivian people to maintain peace and prosperity within the nation. He made this remark while delivering the Presidential address this afternoon at the President’s Office.

Speaking during the Presidential address, President Yameen emphasized that this administration has always worked on constructing and maintaining a strong foreign relation with other nations, particularly countries in this region. Speaking in this regard, the President shed light on the collaborative work carried out with other countries on issues like terrorism and radicalism.

Moreover, the President stated that the interference of external parties in our countries internal affairs will not be tolerated and stated that protecting the nation has always been top-most priority in his administration.

The President also underlined that any small Island nation like Maldives should always give significant importance on maintaining the peace and sovereignty of the country. In addition to this, the President stated that the current administration worked on bringing development and prospering the nation while giving high prominence for the security of the people of Maldives.

During the Presidential address, the President noted that the nation’s interest is more important than any individual’s interest, hence called upon the people to put forth the interest of the nation before putting forward any individual interest. He also shed light on the administration’s work in defending Maldives from external influences.
Source: Presidency Maldives