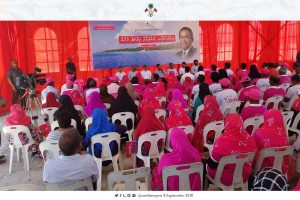 President Abdulla Yameen Abdul Gayoom has called upon the people to set aside our political differences and always prioritise the nation’s interest. The President made this remark while meeting the people of Maamendhoo Island, as part of his visit to some islands of Haddhummathi Atoll.

Speaking at the gathering, the President noted that the right to vote in a democracy was also a national responsibility upon each of us, which would pave the way for future generations.

Further, the President called upon everyone to refrain from any activities that may disrupt the community, and to always prioritise peace and harmony. He also appealed to always uphold our Islamic values, national spirit, and responsibly carry out our duties as Maldivian citizens.

In his speech President Yameen also reiterated this administration’s commitment to upholding the Maldives’ constitution and international policies. In addition, the President stated that it is unacceptable for any party to claim that democracy was not practised in the Maldives.

Prior to the visit, President Yameen visited Hithadhoo Island and inaugurated the island’s harbour this morning.