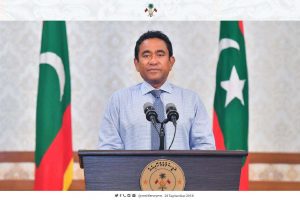 While addressing the nation this afternoon, the President noted that he would continue to serve until the end of the current Presidential term and work to ensure a smooth transition in the interim.

The President touched on some of the transformational development milestones achieved during his term and expressed gratitude toward everyone who contributed to his vision.  He noted that he had consistently worked toward the socio-economic growth of the nation and that he hoped to continue service to community and country.

PROVISIONAL RESULTS ANNOUNCED IN PRESIDENTIAL ELECTIONSPRESIDENT YAMEEN APPEALS TO WORK TOGETHER TO SUSTAIN THE PROGRESS OF THE MALDIVIAN...
Scroll to top