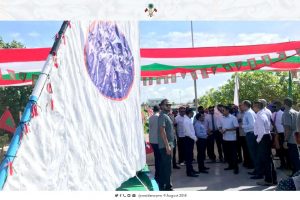 The President is currently on a three-day visit to some islands of Huvadhu Atoll.

The Kooddoo Fishermen’s Marina includes a mosque, a café, a shop that caters to all fishermen’s needs, and 4 guestrooms.

During his current three-day visit the President inaugurated the harbour and attended the ceremony to mark the completion of the beach protection project in Madaveli Island and Faresmaathoda Island. The President also initiated the land reclamation for construction of the Faresmaathoda airport.