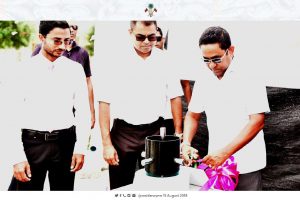 During the ceremony held this morning in Dhiyamigili Island, President Yameen unveiled the monument placed to inaugurate the island’s sewerage services system.

President Yameen began his three-day visit to some islands of Kolhumadulu Atoll on Monday. On day-one, the President inaugurated clean water services in Thimarafushi Island. The President then took part in the ceremony to mark the completion of the beach protection project in Veymandoo Island. He also took part in the ceremony held to mark the completion of beach protection project in Kandoodhoo Island.

IT IS OUR INDIVIDUAL DUTY TO TRANSFORM OUR NATION’S STATUS – PRESIDENT ...THIS ADMINISTRATION WILL ALWAYS UPHOLD THE CONSTITUTION – PRESIDENT YAMEE...
Scroll to top