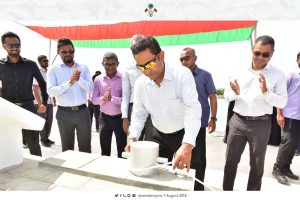 President Abdulla Yameen Abdul Gayoom has inaugurated the habour, of Faresmaathodaa and the airport land reclamation project; and attended the ceremony to mark the completion of the island’s beach protection project.

During the ceremony, the President unveiled the monuments placed to celebrate the occasions.

The Faresmaathodaa Island’s harbour is 900 feet long and 300 feet wide.

Prior to his arrival to Faresmaathoda, President Yameen visited Madaveli Island and inaugurated the island’s harbour and attended the ceremony to mark the completion of the beach protection project.