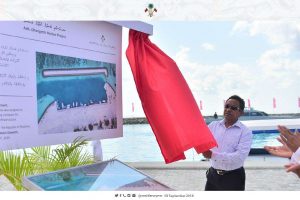 At the ceremony, President Yameen unveiled the monument placed to commemorate the completion of both projects.

During the visit, President Yameen met with the island’s community.

During this tour, the President is scheduled to the mark completion of road development project in Mahibadhoo Island.

Moreover, the President is also scheduled to inaugurate the sewerage services in the Maamigili Island.

As part of his trip, President Yameen is scheduled to visit Mathiveri Island, Thoddoo Island and Kudahuvadhoo Island as part of this tour.

PRESIDENT YAMEEN VISITS DHANGETHI ISLANDPRESIDENT PARTICIPATES IN THE CEREMONY TO MARK THE COMPLETION OF ROAD DEVELOPMENT...
Scroll to top