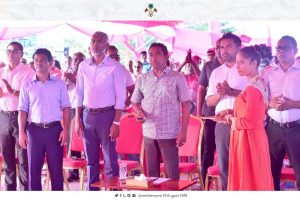 President Abdulla Yameen Abdul Gayoom has inaugurated the Lhaviyani Atoll Hospital building and the harbor of Naifaru Island of Faadhippolhu Atoll this evening.

During the ceremony, President Yameen unveiled the monument placed to commemorate the completion of both projects.

The harbour of Naifairu Island is 1600 feet long and 300 feet wide.

During this visit, President Yameen is also scheduled to visit Hinnavaru Island meet the people of the Island.

PRESIDENT YAMEEN ARRIVES IN NAIFARU ISLANDTHE AIM IS TO INCREASE THE PROFITS FROM FISHERIES SECTOR DURING OUR NEXT TERM...
Scroll to top