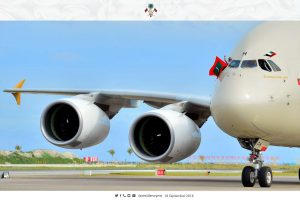 As part of the inauguration, an A380 Airbus of Etihad Airways landed on the new runway, captained by a Maldivian pilot. This is the first landing of an A380 flight at VIA, and was honoured with a water salute. The flight also carried the Maldives’ National Football Team following their victory of the SAFF Suzuki Cup 2018.

At the event, the President was accompanied by First Lady Fathimath Ibrahim, Cabinet Ministers, Parliament members, and senior officials of the government.