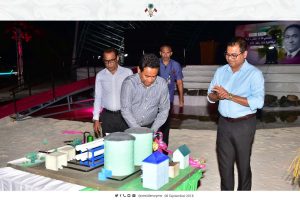 At the ceremony, President Yameen unveiled the monument placed to commemorate the inauguration of the water service.

President Yameen is currently on a visit to some islands of Haddhummathi Atoll.

PRESIDENT YAMEEN SAYS WE MUST ALWAYS HOPE FOR PROGRESS AND GROWTHTHIS ADMINISTRATION IS WORKING ON BRINGING RAPID DEVELOPMENT TO THE MALDIVES-...
Scroll to top