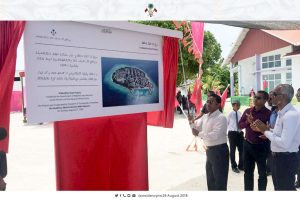 During the ceremony, President Yameen unveiled the monument placed to mark the completion of the project.

Prior to the visit to Meedhoo, the President inaugurated the harbour in Innamaadhoo Island and Inguraidhoo Island this morning.

The President is also scheduled to inaugurate Maafaru Airport and harbour of the Island, and initiate the services of sewerage system, inaugurate clean water services, and mark the completion of shore protection project in Velidhoo Island later today.

As part of this tour, President Yameen is also scheduled to visit, Maduvvari Island and Kendhikulhudhoo Island.