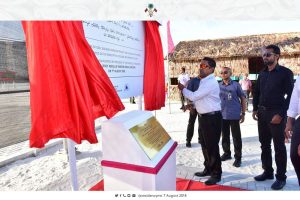 President Abdulla Yameen Abdul Gayoom has participated in the ceremony to mark the completion of four projects in Gaddhoo Island of South Huvadhu Atoll. The ceremony was held this evening at the harbour area of Gaddhoo Island.

During his current three-day visit, the President visited Madaveli and Faresmaathodaa Islands earlier today, where he inaugurated the harbours and attended the ceremony to mark the completion of beach protection projects in the islands. The President also initiated the land reclamation for construction of the Faresmaathoda airport.