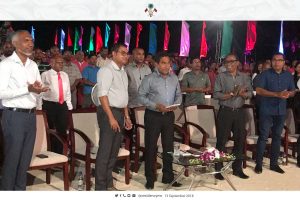 President Abdulla Yameen Abdul Gayoom has this evening participated in the ceremony to mark the completion of four projects in Hithadhoo of Addu City.

As part of his current tour of Addu City and Fuvammulah City, the President will also visit Feydhoo Island and inaugurate the water services of Feydhoo, Maradhoo, and Maradhoo-Feydhoo, and mark the completion of land reclamation project in Feydhoo Island.

MY AIM IS TO SERVE THE NATION – PRESIDENT YAMEENI WANT TO MAKE ALL DENSELY POPULATED ISLANDS INTO FULL-FLEDGED CITIES – PRESIDENT...
Scroll to top