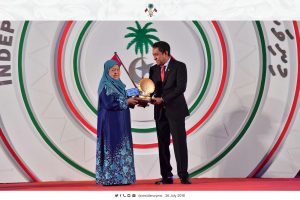 Fifteen honourees received the National Award of Recognition. They were:

In his speech, President Abdulla Yameen Abdul Gayoom extended his congratulations and warm wishes to all the recipients of this year’s National Awards.

COMMUTATIONS GRANTED BY PRESIDENT YAMEEN ON THE OCCASION OF INDEPENDENCE DA...PRESIDENT ANNOUNCES “HIYAA ACCOMPLISHED” PROJECT AS A TOTAL SOLUTION FOR...
Scroll to top