27 May 2014-In his meeting with the newly elected Indian Prime Minister Narendra Modi, President Yameen has reaffirmed the government’s commitment to further strengthening bilateral relations with India. The meeting was held this morning at Hyderabad House, New Delhi.

Underscored by shared values and geographical contiguity between the two countries, President Yameen expressed his confidence that the long-standing close relations between Maldives and India would continue to be further strengthened under Prime Minister Modi’s tenure. He also stated that, in shaping Maldivian foreign policy, India’s interests and status as a global leader would continue to be accorded the highest respect.

President Yameen noted that India was the first country to establish diplomatic relations with the Maldives following its independence in 1965, highlighting the strong historical ties between the two nations.

In discussing the future of the South Asian Association of Regional Cooperation (SAARC), President Yameen noted that the invitation extended to the leaders of SAARC, particularly Pakistan’s Prime Minister Nawaz Sharif, was indicative of the significance afforded to the regional organization by Prime Minister Modi. The Indian Prime Minister also remarked that all SAARC countries should prioritize strengthening regional relations in order to mutually realize their developmental aspirations, and contribute to the prosperity and security of the South Asian region. 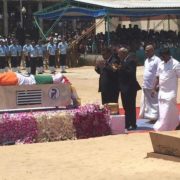 Special Envoy of the President attends the Funeral of Former President of I...