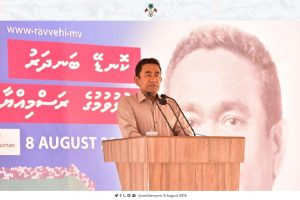 President Abdulla Yameen Abdul Gayoom has reiterated that this Administration works to ensure justice for all and that all are equal under the law. The President made this remark while speaking at the function held this morning to inaugurate the harbour of Kondey Island, North Huvadhu Atoll.

While addressing today’s gathering the President stated that, while maintaining justice for all, this Administration strives to fulfil the desires of the community.

The President also noted that he believes development is a key desire of the community; stating that his aim is to bring development and progress to every corner of the nation.

Speaking at the function, President Yameen highlighted the relationship between development and youth. Youth will want revolutionary changes towards the public good, the President said.

Concluding his speech the President noted that the Administration had sped up the delivery of progress and reiterated his commitment to further delivering swift and meaningful change by addressing the needs of the nation.

President Yameen is scheduled to visit islands in North Huvadhu Atoll today. He will initiate sewerage system services and inaugurate clean water services in Kolamaafushi Island, and mark the completion of the road development project and inaugurate the housing project in Villingili Island.

The President will also inaugurate the Fishermen’s Marina in Kooddoo Island tomorrow.