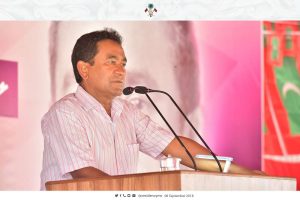 President Abdulla Yameen Abdul Gayoom has called upon the people to never lose hope for progress and advancement of the nation. The President made this remark while meeting the people of Gan Island today, as part of his visit to some islands of Haddhummathi Atoll.

Speaking at the function, the President called upon the youth to participate in the work towards strengthening our economy, and to seek innovative means for development. He also highlighted the efforts being taken by this administration to empower the Maldivian youth. Further, he noted that youth empowerment and responsible participation in nation building leads to contentment and harmony in the society.