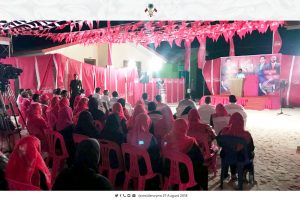 President Abdulla Yameen Abdul Gayoom has stated that Maldivians have faith in the current administration, and that this administration strives to solve all the major issues faced by the people.  The President made this remark while speaking in Dhuvaafaru Island of North Maalhosmadulu Atoll this evening, at a function organized by Progressive Party of Maldives.

Speaking at the ceremony, the President underscored that the theme on which his manifesto is based is shared progress, and stated that his administration treats the country’s youth, women, senior citizens, people with disabilities equally, when it comes to national development.

Speaking in this regard, the President stated that he aspires to seek economic development to Maldives, alongside improving the livelihood of the people. Moreover, President Yameen stated that his goal is to find avenues of income for every citizen who aspires and strives for a better life.