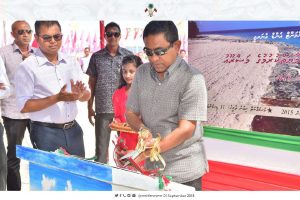 President Abdulla Yameen Abdul Gayoom has attended the ceremony held to mark the completion of the shore protection project in Kurendhoo Island, Faadhippolhu Atoll, this morning.

During the ceremony, President Yameen unveiled the monument placed to commemorate the completion of the project.

As part of the tour, President Yameen visited Naifaru Island yesterday and inaugurated the Lhaviyani Atoll Hospital building and the island’s harbor. Moreover, the President made a visit to Hinnavaru Island and met the people of the island last evening.

President Yameen is also scheduled to visit Olhuvelifushi Island as part of this tour.