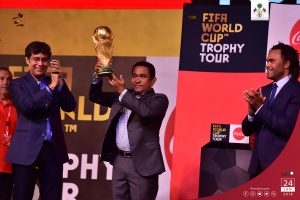 President Abdulla Yameen Abdul Gayoom has this evening unveiled the FIFA World Cup Trophy in Maldives, as part of the trophy tour. Maldives is the second stop of this year’s tour.

Speaking at the ceremony held this evening at the National Football Stadium, the President highlighted that the highest number of athletes competed in international tournaments during the last four years, and that it was during the last four years that Maldives has won the highest number of medals in international competitions.

President Yameen reiterated his aim to facilitate all sportsmen across the country, and underscored the priority accorded by the administration to establish sporting facilities in all parts of the country. In this regard, the President noted that during the last four years, more sporting facilities, pitches and courts have been built in the country, surpassing the number built 50 years prior. He especially noted that this administration introduced remuneration contracts for all national team players, as part of the Government’s sports manifesto pledge.

In his speech, the President extended heartfelt appreciation on behalf of all Maldivians, to the management of FIFA, the World Cup organising committee, Football Association of Maldives, and Coca-Cola Company for the joyous occasion of the World Cup trophy’s visit to Maldives.