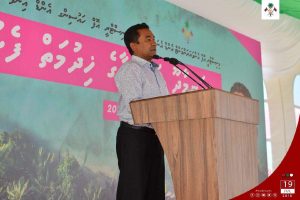 President Abdulla Yameen Abdul Gayoom has urged not to slander the country as it will cause irrevocable damages to the country and its people. He made this remark while speaking at the function held this morning, to inaugurate the services of sewerage system in Hanimaadhoo Island of South Thiladhummathi Atoll, as part of his current visit to some islands in the North and South Thiladhummathi Atolls.

Speaking in this regard, the President stated that such actions that are damaging to the country and the people are unfair in all manners. President Yameen underscored the economic drawbacks being faced by the country, as a result of such unjust actions. He further reiterated his administration’s commitment to upholding democratic values, in a way that does not contradict the country’s rule of law or the Islamic principles.

Concluding his speech, the President conveyed his aspirations for the Maldives to maintain its peace and harmony, as we reach new heights in sustainable development. He further noted that all Maldivians shared this common dream for a better future for our country.

The President visited Dhiddhoo Island on Wednesday, and inaugurated the island’s clean drinking water services and housing project, and attended the ceremony held to mark the completion of the island’s beach protection project and road development project. Moreover, President Yameen initiated the services of sewerage system in Kelaa Island and inaugurated the marina style jetty in Baarah Island.

THERE ARE STILL THOSE WHO PUT THE CITIZENS BEFORE THEMSELVES – PRESIDENT ...CEREMONY HELD TO HANDOVER AND RELEASE THE SPECIAL STAMPS COMMEMORATING 45 YEARS...
Scroll to top