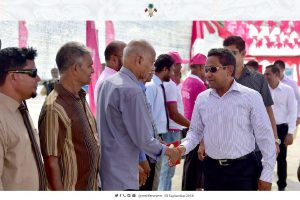 President Abdulla Yameen Abdul Gayoom has visited Dhangethi Island of South Ari Atoll this morning, as part of his current visit to some islands of the Ari Atoll and South Nilandhe Atoll.

During the visit, President Yameen met with the island’s community.

During this tour, the President is scheduled to mark the completion of road development project in Mahibadhoo Island.

Moreover, the President is also scheduled to inaugurate the sewerage services in the Maamigili Island.

President Yameen is also scheduled to visit Mathiveri Island, Thoddoo Island and Kudahuvadhoo Island as part of this tour.

SECRETARY BILATERAL HOSTS LUNCHEON IN HONOUR OF THE VISITING DELEGATION FROM...PRESIDENT YAMEEN INAUGURATES THE HARBOUR AND INITIATES THE WATER SERVICE IN...
Scroll to top