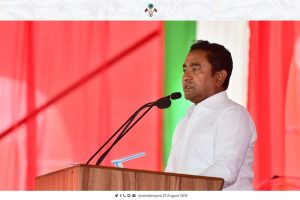 President Abdulla Yameen Abdul Gayoom has pledged to establish a Specialty Hospital for Women and Children if he is elected for the next term of presidency. He made this pledge this afternoon, while addressing the public at the ceremony held to inaugurate the Water Supply Services and Sewerage Services in Hulhudhuffaaru Island, North Maalhosmadulu Atoll.

During the ceremony, President Yameen shed light on the ongoing and planned developmental projects carried out in this administration. In this light the President stated that the administration has fulfilled innumerable wishes for its people, and emphasized that in the attempt to improve the education system of the country, this administration has produced more than 700 new classroom facilities. He also highlighted that it was during the current presidential term that the country’s largest school was developed, in Milandhoo Island of North Miladhummadulu Atoll.

Shedding light on the health sector development of Maldives, President Yameen stated that during the past five years his administration has facilitated visits by super specialist doctors, in order to provide better healthcare options to several Maldivians residing in the islands. In addition to this, President Yameen also stated that in an attempt to find a permanent solution for better healthcare, this administration has focused on providing specialist training to Maldivian doctors.

Speaking further, the President stated that today, the State companies have the ability and capacity to carryout development projects at a faster pace. Reflecting on the water supply services situation in the country prior to 2013, where there were only 6 Islands with the system established, the President pointed out that this administration has managed to establish water supply systems in 30 islands so far, and that the project was currently underway in 15 additional islands. President Yameen also stated that the projects will be completed in these 15 Islands in the middle of next year.

Tweet
August 27, 2018/by Niharika Sharma
https://www.maldiveshighcom.in/wp-content/uploads/2021/02/Logo-High-Commission-of-the-Republic-of-Maldives.png 0 0 Niharika Sharma https://www.maldiveshighcom.in/wp-content/uploads/2021/02/Logo-High-Commission-of-the-Republic-of-Maldives.png Niharika Sharma2018-08-27 15:53:532018-08-28 10:55:34PRESIDENT YAMEEN VOWS TO ESTABLISH A SPECIALTY HOSPITAL FOR WOMEN AND CHILDREN IN HIS NEXT TERM OF PRESIDENCY