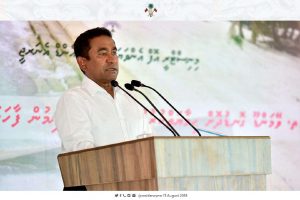 President Abdulla Yameen Abdul Gayoom has stated that resource utilisation is the key to achieve the country’s economic development goals. The President made this remark while speaking at the ceremony held this afternoon to mark the completion of beach protection project in Veymandoo Island of Kolhumadulu Atoll.

In this regard the President noted that this administration prioritizes the needs of people and will continue to fulfill their demands, through innovative utilisation of the country’s resources. Speaking in this regard, he noted the importance of empowering the State Companies and highlighted the high number of job opportunities offered by the State Companies.

Continuing on, President Yameen briefed the public on his electoral pledge of raising the retirement age, stating that 65 years old individuals will have the opportunity to continue in their jobs without having to retire. Similarly he noted that those who wish to retire after the age of 65 will have the option as well, according to the existing retirement and pension procedure. In his speech, the President also highlighted the future development plans.

The President further noted that the public wishes for their needs to be fulfilled and difficulties to be eased. He also conveyed his confidence that the people would put forth peace and harmony in working towards their progress.

During his three-day visit to the atoll, the President is scheduled to take part in the ceremony to mark the completion of beach protection project in Kandoodhoo Island.

The President will also initiate the services of sewerage system in Buruni Island, Dhiyamigili Island and Madifushi Island. Moreover, President Yameen will mark the completion of the land reclamation project and the protection of the reclaimed land area in Madifushi.

President Yameen is also scheduled to travel to Vilufushi Island, and mark the completion of the island’s road development project.