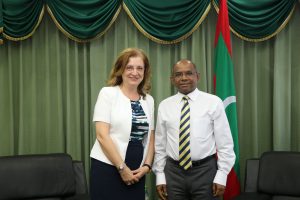 At the meeting held at the Ministry of Foreign Affairs, Ambassador Gitman congratulated the Minister on his appointment and discussed about enhancing cooperation in areas of mutual interest particularly in the education sector.

Ambassador further highlighted the candidacy of Romania to the United Nations Security Council for the term of 2020-2021, election which is scheduled to be held during the 73rd Session of UNGA in June 2019 and requested for the support of Maldives for their candidature.

Minister also noted the close bilateral relations between the Maldives and Romania and assured Ambassador Gitman that Maldives will continue working closely with Romania on ways to further strengthen the existing ties.