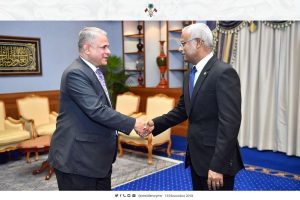 The Secretary-General of SAARC, His Excellency Mr. Amjad Hussain B Sial, has paid a courtesy call on President Ibrahim Mohamed Solih, this morning at the President’s Office.

During the call, the President welcomed the SAARC Secretary-General to the Maldives and thanked him for accepting the invitation to the Presidential Inauguration ceremony held last evening.

Discussions were also held between President Solih and the Secretary-General of SAARC on how to combat the challenges being faced by the SAARC organization.

President Solih assured the SAARC Secretary General of Maldives’ commitment to resolving the challenges through dialogue with other member States of SAARC.

FORMER PRESIDENT OF SRI LANKA PAYS COURTESY CALL ON THE PRESIDENTNew US Ambassador Her Excellency Alaina Teplitz, calls on the Minister of Foreign...
Scroll to top