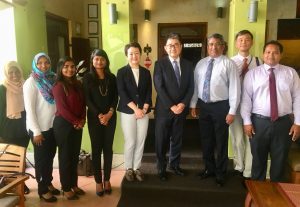 During the luncheon, the discussions between the Secretary Bilateral and the Director General focused on opportunities for further enhancing socio-economic cooperation between the two countries through JICA.

The Secretary Bilateral Khaleel thanked JICA for the opportunities and exchange programmes offered to the Maldives, while noting that this has positively contributed to the human resource and economic development of the country.

The Secretary Bilateral and the Director General also discussed some of the ongoing projects under the assistance of the Government of Japan. The Director General was accompanied by Ms Kamei Haruko, Senior Director for South Asia Division from JICA Headquarters, Mr. Saito Hiroshi, Resident Representative and officials from the JICA Maldives Office.