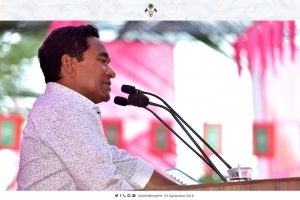 Noting the long-term benefits of the Sina-Male´ Bridge, President Abdulla Yameen Abdul Gayoom has stated that the bridge is a national heritage belonging to the Maldivian people. The President made this remark while speaking at the function held this evening in Thoddoo Island, North Ari Atoll, as part of his visit to the island.

Speaking at the function, President Yameen noted that this administration has always prioritised serving the nation and its people. He especially highlighted the many milestones achieved by this administration in the education sector, and underscored that over 95 percent of students completing their higher education are on government aid.

Speaking at the ceremony, the President reiterated his belief that the youth is the country’s future. In this regard, he noted the importance of aiding the youth to accomplish their dreams.

President Yameen is currently on a two-day visit to some islands of North and South Ari Atoll and South Nilandhe Atoll.

Prior to visiting Thoddoo Island, the President visited Mathiveri Island and met the people of the Island.

As part of his current tour, President Yameen visited Dhangethi Island earlier this morning and inaugurated the island’s harbour and clean water services. He also visited Mahibadhoo Island to mark the completion of road development project in the Island.

The President is also scheduled to visit Maamigili Island and inaugurate the sewerage services system in the island.

President Yameen will also visit Kudahuvadhoo Island as part of this two-day tour.