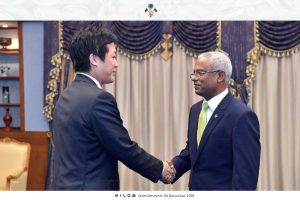 Special Advisor to the Japanese Prime Minister, Member of Parliament His Excellency Mr. Kentaro Sonoura, has paid a courtesy call on President Ibrahim Mohamed Solih. The meeting was held this afternoon at the President’s Office.

During the call, the President welcomed Mr. Kentaro Sonoura to the Maldives and thanked him for visiting the country. Shedding light on the strong bilateral ties that exist between the Maldives and Japan, President Solih stated that ever since the establishment of diplomatic relations in 1967 both countries have enjoyed mutual trust and understanding, and expressed interests to further strengthen the existing relations between the two countries.

Furthermore, President Solih extended gratitude to the Japanese government for their continuous support and assistance provided to the people of Maldives.

Speaking during the call, Mr. Kentaro Sonoura congratulated President Ibrahim Mohamed Solih on his assumption of Office, and stated that the two countries share common views on an array of issues of mutual interest, specifically on issues related to the international arena.

Mr. Kentaro Sonoura also expressed hope and confidence to continue working closely with the Maldives, and further consolidating the existing relations between the two countries.