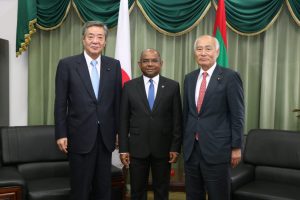 His Excellency Wataru Takeshita, Special Envoy of the Prime Minister of Japan and Member of the House of Representatives of Japan paid a courtesy call on Minister of Foreign Affairs, His Excellency Abdulla Shahid today. Mr. Takeshita is also the President of the Japan-Maldives Parliamentary Friendship League and is in the Maldives on invitation from President Ibrahim Solih to attend the Presidential Inauguration Ceremony that was held on 17 November 2018. Mr. Takeshita has previously visited the Maldives in 2014.

During the meeting, Foreign Minister Shahid and the Special Envoy discussed ways to further strengthen the relations between the two countries in areas of mutual interest. The Foreign Minster emphasised on the historic and lasting relations between the two countries that is founded on a mutual understanding of trust and friendship. The Foreign Minister also recognised and thanked the Government of Japan for the development assistance provided by Japan which is featured prominently throughout the development journey of the Maldives.

The Special Envoy was also accompanied by His Excellency Masayoshi Yoshino, Member of House of Representatives, who recognised and thanked the Government of the Maldives for its assistance to Japan during the 2011 earthquake.

The resident Ambassador of Japan to the Maldives, His Excellency Kazumi Endo and other senior officials from the Ministry of Foreign Affairs of Japan was also present in the meeting.