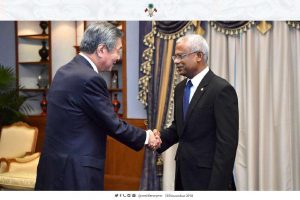 Special Envoy of the Japanese Prime Minister, Member of the House of Representatives Wataru Takeshita has paid a courtesy call to President Ibrahim Mohamed Solih, this morning at the President’s Office.

During the call, the President welcomed Mr. Wataru Takeshita to the Maldives and thanked him for attending yesterday’s Presidential Inauguration ceremony.

The President and the Japanese Member of the House of Representatives discussed ways to further strengthen the close ties between the Maldives and Japan.

SPECIAL ENVOY OF THE CHINESE PRESIDENT PAYS A COURTESY CALL ON THE PRESIDEN...THE SECRETARY OF STATE FOR FOREIGN AFFAIRS AND INTERNATIONAL COOPERATION OF...
Scroll to top