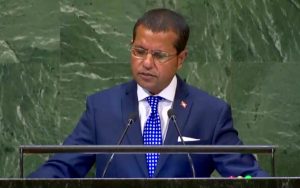 The Presidential election held peacefully and seamlessly, with 89% of voter turnout, was extraordinary, and a moment that made “every Maldivian proud of how far we have come” in the country’s journey towards democracy consolidation, says the Maldives representative at the United Nations today. The Maldives Permanent Representative to the United Nations, H. E. Dr. Ali Naseer Mohamed was speaking at the General Debate of the ongoing Seventy-Third Session of the United Nations General Assembly.

During his Address to the General Assembly, the Permanent Representative highlighted that following the Presidential election held on 23rd September, the country is at the moment going through the process of transfer of power from one elected government to the other. He also noted that the accelerated pace of democratization in the Maldives is going in tandem with even faster growth in social and economic developments. From the humble beginning, as one of the poorest countries in the world at independence in 1965, to an upper-middle income country today, is a success story by any measure, noted the Maldives statement.

Under the stewardship of President Abdulla Yameen Abdul Gayoom, the Maldives focused on developing and modernizing critical infrastructure to stimulate growth in the country’s main industries and transforming the physical landscape of the capital through consolidating three separate populations, and thus, helping to achieve economies of scale. The Permanent Representative reaffirmed that the Maldives will always work with its international partners and stakeholders, to achieve greater progress and prosperity, both domestically and internationally.

Referring to ongoing global issues, Ambassador Mohamed highlighted the rights of the Palestinian people to self-determination and called for a two-State solution in which the State of Palestine achieves its sovereignty within the 1967 borders, with East Jerusalem as its capital. The Maldives also called for a peaceful end to the continuing war in Syria and an end to the atrocities that are being committed against Muslims in Myanmar.

On the side-lines of the High Level Segment, the Maldives also participated and delivered national statements in the Ministerial Meeting for the Non-Aligned Movement, the Organisation of Islamic Cooperation (OIC) meeting, and the SAARC Ministerial Meeting. In collaboration with the World Health Organization (WHO), Indonesia and Thailand, the Maldives co-hosted a side event entitled “Eliminating TB in 2030: Accelerating Innovation and Collaboration to Ending TB in South-East Asia” which focuses on national strategies and achievements in the eradication of tuberculosis.

The General Debate for the Seventy-Third Session of the United Nations General Assembly commenced on the 25th of September 2018, at the United Nations Headquarters in New York. The theme for this year’s session is, “Making the United Nations Relevant to All People: Global Leadership and Shared Responsibilities for Peaceful, Equitable and Sustainable Societies”.

PRESIDENT APPOINTS COMMISSIONER OF POLICEJoint Secretary at the Ministry of External Affairs of India,Mr. Dinesh K. Patnaik...
Scroll to top