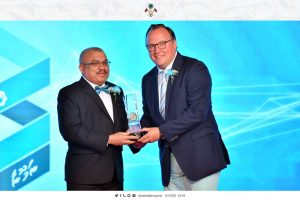 Vice President Abdulla Jihad has stated that the administration will continue to work towards compiling double tax avoidance agreements, as part of this administration’s economic policies and to encourage more foreign investments. He made this remark while addressing the function held at Dharubaaruge to celebrate the 8th Anniversary of Maldives Inland Revenue Authority (MIRA) this evening.

Speaking at the function, the Vice President stated that the administration was putting in every effort to overcome the challenges being faced in strengthening the taxation system and reforming taxation policies with MIRA’s recommendations.

Continuing on, the Vice President highlighted the importance of providing ease for small and medium enterprises for the growth of new enterprises in the Maldivian economy. In this regard, the Vice President stated that the reason behind the peace and harmony in the most developed countries is their robust taxation policies and system, and providing tax benefits to the common people.

Highlighting the success of President Yameen’s open economy policy, the Vice President noted that it attracts mega foreign investments to the Maldives, and speeds up the growth of the Maldivian economy. He also conveyed his appreciation to President Yameen for his visionary steps taken towards transforming the country’s economy.

Concluding the speech, the Vice President called upon all MIRA employees to continue to uphold their integrity, and always be honest in performing their responsibilities. In addition, he called upon all taxpayers to be vigilant in fulfilling their constitutional duty.

During the function, the Vice President awarded the “Ran Laari” (Golden Coin) award to this year’s recipients. The Ran Laari award is given in recognition of the highest taxpayers, and those who pay tax on time.