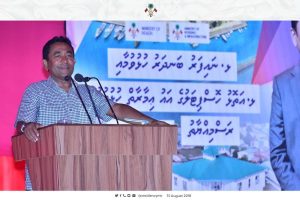 President Abdulla Yameen Abdul Gayoom has stated that during the next term of Presidency his administration aims at increasing the revenues from the fisheries industry, and stated that as part of this plan this administration has already made the decision to introduce a new fish cannery in Felivaru Island. The President made this remark while addressing the people of Naifaru Island of Faadhippolhu Atoll, during his visit to the island.

Responding to the opposition’s denial of the transformational development being brought in the Maldives, President Yameen called upon the opposition to allow him to prove himself and his capability and skillset. Speaking in this regard, President Yameen stated that during the next 5 years of presidency his administration would payback all the current loans and take the Maldives to a whole new level where everyone’s basic needs are fulfilled. He also said that the administration will put in every effort to increase the Income per Capita of Maldives to USD 20,000 before the end of the next 5 years.

Shedding light on the success of the administration’s development agenda, President Yameen highlighted that infrastructure such as harbours and hospitals in the islands being among the biggest in the country were evident of the development the country has seen recently. Moreover, the President emphasized the efforts made by the administration to improve the infrastructure resources in several sectors across the country.

Speaking in this light, the President stressed on the planned development projects to be carried out in the country.

During this tour, the President is scheduled to mark the completion of the shore protection project in Kurendhoo Island tomorrow.

President Yameen is also scheduled to visit Hinnavaru Island, and Olhuvelifushi Island as part of this two-day tour.

Tweet
August 31, 2018/by Niharika Sharma
https://www.maldiveshighcom.in/wp-content/uploads/2021/02/Logo-High-Commission-of-the-Republic-of-Maldives.png 0 0 Niharika Sharma https://www.maldiveshighcom.in/wp-content/uploads/2021/02/Logo-High-Commission-of-the-Republic-of-Maldives.png Niharika Sharma2018-08-31 12:45:592018-09-05 11:48:00THE AIM IS TO INCREASE THE PROFITS FROM FISHERIES SECTOR DURING OUR NEXT TERM OF PRESIDENCY – PRESIDENT YAMEEN