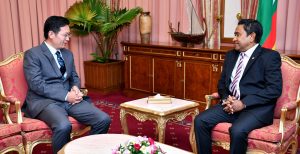 The Ambassador of the People’s Republic of China, His Excellency Zhang Lizhong, presented his Letter of Credence to President Abdulla Yameen Abdul Gayoom, this morning, at the President’s Office.

During the call, the President extended greetings from the Government and the people of the Maldives, to President H.E. Xi Jinping, the Government and the people of China and assured full commitment to bolster existing bilateral relations. He conveyed thanks and appreciation for China’s continued assistance and support towards the socio-economic development of the Maldives and expressed hopes for further strengthening the development partnership. In this regard, the President highlighted on two mega projects, China-Maldives Friendship Bridge Project and Upgrading and Expansion of Velana International Airport Project. He firmly reiterated the Government’s commitment to the One-China Policy, the policy that endorses China as the legitimate and rightful representative of the aspirations of all Chinese people. The President also expressed appreciation for China’s cooperation with the Maldives in advancing mutual interests on various international fora, for the common benefit of the two countries and their peoples.

The Ambassador conveyed greetings and good wishes of the President and the Government of China and noted that he was deeply impressed with the development trajectory of the Maldives, particularly with the openness to foreign direct investment involving mega development projects. He conveyed assurances to collaborate closely with the Government of Maldives to enhance the cooperation between China and the Maldives through increasing trade and investment as well as increasing the number of Chinese tourists to the Maldives.

The President was accompanied at the call by the Minister of State for Foreign Relations at the President’s Office, H.E. Mohamed Naseer and the Foreign Secretary at the Ministry of Foreign Affairs, H.E. Ahmed Sareer.

Maldives and Turkey sign two Memoranda of Understanding‘’The Maldives practices and follows an Indian First policy when it comes...
Scroll to top