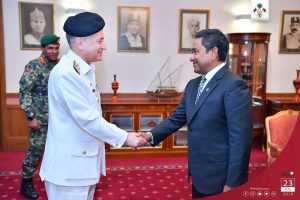 During the call, the President welcomed the Admiral to the Maldives and conveyed greetings and good wishes to the leaders of Pakistan.

Highlighting Pakistan’s continued assistance and support for the development of the Maldives, the President expressed hope and confidence that the Maldives and Pakistan will continue working together on bilateral and international issues of common concern, to further strengthen the close ties of friendship and cooperation that exist between the two countries.

The President also wished the Admiral a fruitful visit and a pleasant stay in the Maldives.

Admiral Zafar Mahmood Abbasi thanked the President for receiving him and extended greetings and good wishes to the President, the Government and the people of the Maldives. In addition, he conveyed his well wished to President Yameen for the upcoming presidential election.

Noting that Pakistan and the Maldives are two brotherly Muslim nations, Admiral Zafar Mahmood Abbasi expressed his confidence for continued strong relations between the two countries in the future.

THE NON-RESIDENT AMBASSADOR OF ZAMBIA PRESENTS HER LETTER OF CREDENCE TO THE...PRESIDENT INAUGURATES RAAVERIBEY FOOD COURT
Scroll to top