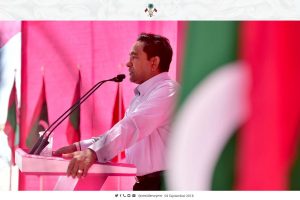 President Abdulla Yameen Abdul Gayoom has stated that the people’s hopes and aspirations are formulated as a result of their own work, and that the development the country sees today is the result of that hope. The President made this remark while speaking at the function held this morning to meet the people of Kudahuvadhoo Island, South Nilandhe Atoll.

Speaking in this regard, the President underscored the development projects carried out in the country and briefed about future development plans. In this regard, President Yameen emphasized the innovative developmental projects carried out in the educational sector of Maldives. He stated that providing tablets for students, which would replace text books in the future, was part of the administration’s efforts for innovative means of progress in the sector.

Further, the President called upon the people to stand up together in order to protect our sovereignty, unique culture, religion and patriotism.

Prior to visiting Kudahuvadhoo Island, the President visited Dhangethi Island yesterday and inaugurated the island’s harbor and initiated the clean water services. He also visited Mahibadhoo Island to mark the completion of road development project in the Island and visited Maamigili Island this morning and inaugurated the island’s sewerage system.

As part of this two-day tour, President Yameen visited Mathiveri Island and Thoddoo Island and met the people of both Islands.