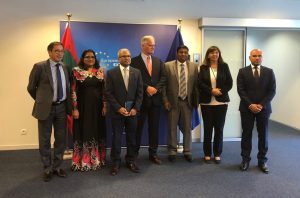 During the two-day official visit to Brussels, the Government delegation held meetings with the European External Action Services (EEAS), members of the European Parliament and other EU institutions.

The consultations provided a platform to discuss the recent political developments in the Maldives, the upcoming Presidential Elections and to focus on strengthening the existing cooperation with EU in areas including climate change, fisheries and Indian Ocean security.

Foreign Minister Dr. Mohamed Asim also met with the Secretary General and Vice Minister of the Ministry of Foreign Affairs, Foreign Trade and Development Cooperation of Belgium, His Excellency Dirk Achten. During the meeting, discussions were held on strengthening cooperation between the Maldives and Belgium in the areas of mutual interest, including tourism cooperation as well as countering terrorism and violent extremism.

Ambassador of Maldives to the European Union and Belgium His Excellency Mr. Ahmed Shiaan also participated in the meetings.

Statement by the Government of Maldives in response to the statement issued...THE GOVERNMENT WELCOMES MDP’S DECISION TO PARTICIPATE IN THE 2018 PRESIDENTIAL...
Scroll to top