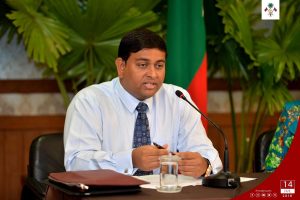 The Chair of All-Party-Talks, Dr. Mohamed Shainee, has extended invitations to Maldivian Democratic Party’s (MDP) nominated Presidential Candidate, MP Ibrahim Mohamed Solih, and Jumhooree Party’s (JP) nominated running mate, MP Faisal Naseem, renewing the invitation to participate in talks with the Government.
This invitation was extended, following the decision by JP’s Council meeting, to field JP’s running mate to contest alongside MDP’s presidential candidate in the upcoming Presidential Elections. In his invitation, the Chair of All-Party-Talks has stressed the importance of engaging in dialogue to reconcile political differences to guarantee free, fair, transparent, and successful elections.
Hence, the Chair has called upon all political parties to reconcile their differences, and come together in the national interest in order to have a successful Presidential election.

APPLICATION OPEN FOR MEMBERSHIP OF ELECTIONS COMMISSIONTHE GOVERNMENT CONGRATULATES MP FAISAL NASEEM ON HIS NOMINATION AS JUMHOOREE...
Scroll to top