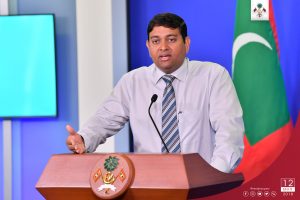 The Government of the Maldives has once again renewed its invitation to the Adhaalath Party, the Jumhooree Party, and the Maldivian Democratic Party to participate in All-Party Talks. This invitation was sent as a response to a letter sent on 11 March 2018 to the President, by these three political parties and a representative of Former President Maumoon Abdul Gayoom.

In its response, the Government stressed the importance of dialogue without pre-conditions in paving the way to find mutually beneficial solutions to political disagreements amongst the stakeholders. In response to the claim by the Opposition, that the Government has given conflicting statements with regards to UN participation in the All-Party-Talks and there is some disagreement within the government regarding UN involvement, the Government further noted that it was His Excellency President Yameen’s initiative to engage UN in the discussions and, neither he nor the Government, has at any time objected to the UN’s involvement in facilitating All-Party-Talks.

Including today’s invitation, the Government has now issued 12 invitations to the political parties requesting their participation in discussions. Furthermore, the Government highlights that during February 2018 it has made attempts, through expert intermediaries, to engage in discussions with political parties to find a way forward and address current political disputes. Giving more details to this recent attempt, Government stated that it was with Former President Mohamed Nasheed, who claimed that he also represented the political opposition leaders that the Government was engaged with, through expert intermediaries. The Government believes that such discussions are of the utmost importance for the welfare of the people of the Maldives, and are necessary to improve the current situation in the country. However, it is with deep regret, that the Government noted that its attempts to start the All-Party-Talks through Former President Nasheed was unsuccessful as the verbal confidentiality agreement was breached when the opposition, through a joint press conference, announced All-Party-Talks can only happen with multiple preconditions. It is worrisome to note that political leaders are unwilling to cooperate with the Government on matters of national importance, relating to the welfare of the Country.

The Government prioritizes full transparency, both at home and abroad, and it continues to keep its international stakeholders, including the United Nations and the European Union, abreast of the situation, including of its efforts to reconvene All-Party Talks.

The Government calls upon all political parties to set aside their own interests and to work for the benefit of all Maldivians, and to participate in the All-Party Talks without any pre-conditions in order to find a way forward to improving the political situation in the nation.

“The UK led joint statement at the 37th Human Rights Council is unwarranted...Administration briefs international media on the current situation in the M...
Scroll to top