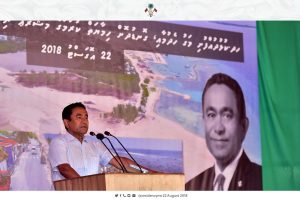 President Abdulla Yameen abdul Gayoom has stated that projects carried out by foreign parties have not always been in the best interest of the Maldivian people, and that it is the Maldivian government that always best caters for its people. The President made this remark while speaking at the ceremony held to mark the completion of road development  project, and shore protection project in Kulhudhuffushi Island, South Thiladhummathi Atoll.

While addressing tonight’s gathering, the President highlighted the importance of actively involving youth in the process of nation building, and stated that this administration has seen drastic reduction of youth involvement in major crimes as a result of its efforts made towards youth empowerment. Emphasizing the priority given to youth empowerment by this administration, President Yameen noted  the importance of providing employment opportunities, and stated that more than 7000 jobs have already been created for the youth within the past 5 years.

Speaking in this regard, President Yameen stated that his objective for the upcoming 5 years is to boost the GDP per capita from $10,000 to $20,000.

President Yameen further highlighted the development projects being planned. Furthermore, he reiterated his priority of focusing on the welfare of children with disabilities, and pledged to increase state benefits given to those children to Mvr 5000, within the next five years.

President Yameen is currently on a visit to South Thiladhummathi Atoll. Prior to visiting Kulhudhuffushi Island, he inaugurated the harbour in Nolhivaranfaru Island this afternoon.

PRESIDENT PARTICIPATES IN THE CEREMONY TO MARK THE COMPLETION OF ROAD DEVELOPMENT...PRESIDENT YAMEEN VISITS FEEALI ISLAND
Scroll to top