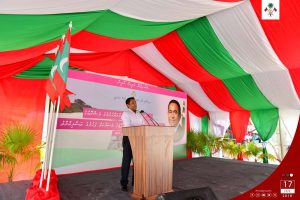 Noting that every country has their own unique democratic system, President Abdulla Yameen Abdul Gayoom has stated that the Maldives’ democratic system must reflect the Islamic values. He made this remark while speaking at the function held to mark the completion of beach protection project.
In this regard, the President reiterated that any policy or ruling that is in conflict with Islam would never be allowed in the Maldives, and called upon everyone to always put forth national interest.
Addressing the public, President Yameen noted that the Maldivian people trust him to deliver on his promises and make the people’s dreams come true. He also conveyed his hopes that the people will continue to trust him in the future.
Further speaking, President Yameen shed light on the role of youth in bringing development to the nation and encouraged the youth’s participation in the different developmental endeavours being carried out across the country.
Concluding the speech, the President shed light on the planned projects for next the Presidential term. He further spoke on the administration’s plans for the betterment of the people, and increase the country’s resources.

I WANT TO BRING DEVELOPMENT TO THE COUNTRY WHILE MAINTAINING OUR PRINCIPLES...WE HAVE SECURED INVESTORS’ TRUST AS A RESULT OF OUR ECONOMIC POLICIES –...
Scroll to top