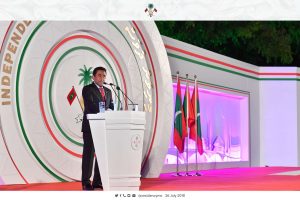 His Excellency President Abdulla Yameen Abdul Gayoom, in his address to the nation on the occasion of Maldives’ 53rd Independence Day, has stated that Maldives has already entered a new chapter in terms of Maldives’ own policy on foreign and international affairs.
In his address, President Yameen noted that we will now be taking the initiative to seek out better prospects for our own people, on our own volition in our foray into the wider international and globalized realm.
The President further clarified that the newly established ties on commerce and trade, are neither designed to replace existing ones, nor are they intended to change the basic premise of our foreign and domestic policies; instead these new relationships have been established to seek better prospects for Maldivians.
The President has also advised the nation to be aware of the different ideologies, creeds and political beliefs Maldivians come across, and called on them to take into account the wider interests of the Maldivian people when considering decisions and pronouncements on the Maldives taken by other countries.

“I HAVE ACHIEVED WHAT MY CITIZENS HAD ALWAYS ASKED FOR, AND I HAVE BROUGHT...PRESIDENT’S AWARD FOR SPECIAL ACHIEVEMENT CONFERRED
Scroll to top