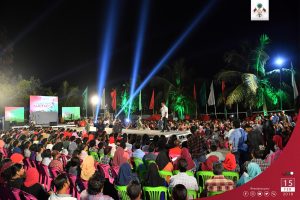 Speaking at a function organised by the Progressive Party of Maldives this evening, President Abdulla Yameen Abdul Gayoom has stated that the future of the Maldives belongs to its youth.

Noting that the youth was the wind of change, the President said that each one of the youth population played an important role in nation building. Speaking in this regard, the President noted that there were lessons to be learnt when the youth stand up in defence of the country.

Highlighting that our lives are based on how we utilize the opportunities that are presented to us, Presient Yameen advised all the youth to focus their energy into being more productive, and to demand from the nation, their desired developmental progress.

Furthermore, the President underscored that every Maldivian citizen must have equal rights regardless of their political views. He further reiterated that Maldivians will make their own decisions regarding the country’s internal affairs, saying that we would never tolerate foreign intereference into our domestic matters.

“Emergency Will Be Lifted as Scheduled Once ‘Judicial Deadlock’ Is...H.E. Amb Ahmed Mohamed speaks exclusively to The Indian Express
Scroll to top